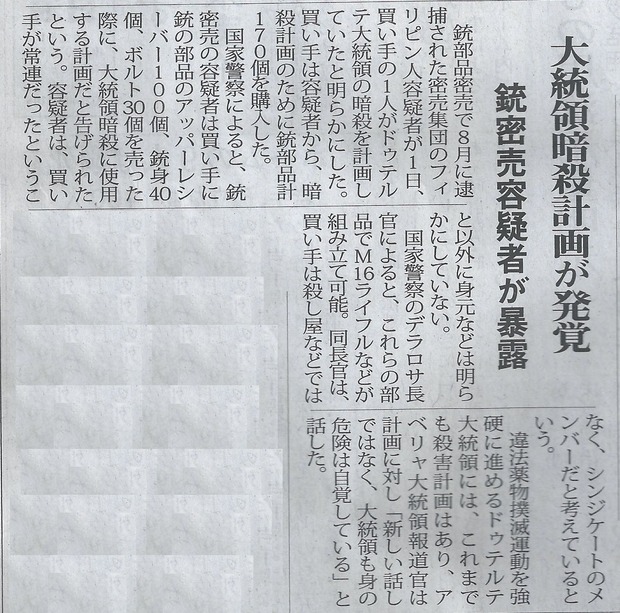 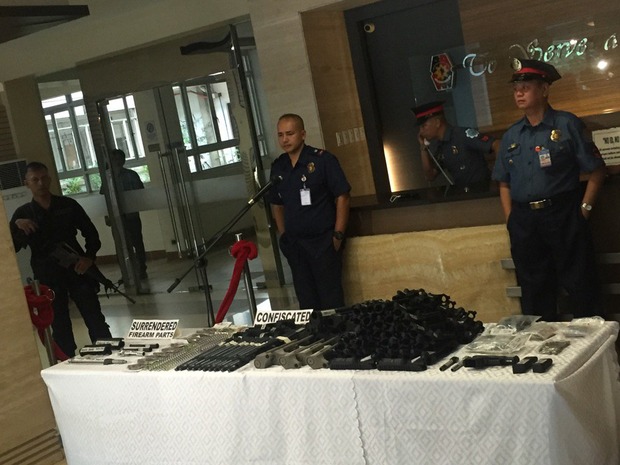 Police on Thursday claimed to have thwarted the possible assassination of President Rodrigo Duterte after busting a suspected gun smuggling syndicate supposed to sell gun parts to a group planning to kill the President.

During a press conference of the Philippine National Police at Camp Crame in Quezon City, Wilford Palma, who admitted being part of the gun smuggling group, said their "number one customer" ordered gun parts before the police arrested them.

Palma admitted that they would not have reported the assassination attempt to the police if they had not been arrested.

PNP chief Director General Ronald dela Rosa said they believed the buyer of the gun parts is not part of the group hired to kill Duterte but was only asked to purchase the firearms.

Chief Supt. Roel Obusan, head of the Criminal Investigation and Detection Group, said they will validate Palma's claim but will also consider him as a witness because of his testimony.

Palma's boss is Bryan Ta-Ala, currently confined at an intensive care unit of a hospital in Bacolod due to hypertension.

The CIDG confiscated from Ta-ala and Palma some P4.5-million worth of smuggled gun parts from US.

The two were arrested based on information given by the US Homeland Security to the Bureau of Customs which relayed it to the CIDG.

They were nabbed on August 6 at 11 a.m. at Atlas, Villa Cristina Subdivision, Brgy. Tangub, Bacolod City.

Their modus operandi employed using fictitious names and false documents when claiming the packages with the different gun parts which are bought in the US, and shipped to the country through the use of legitimate international cargo forwarders.

The items are then sold to gun enthusiasts across the country through a website and online community called Pinoy Pistol Forum. The gun parts are then shipped to customers using local courier services.

Palma said there were previous deliveries from the US which were facilitated through Atlas Shippers International Incorporated, involving the delivery of 104 different major component parts for 5.56 caliber rifle; and 298 minor component parts for 5.56 rifle; accessories; and bullet proof vests, which were all delivered on different occasions to 129 personalities and one company across the country.

He said in the two years of their operation, they have received 10 balikbayan boxes of gun parts from the US.

A case was filed against Ta-ala and Palma for violation of RA 10591 (Comprehensive Firearms and Ammunition Regulation Act). Palma underwent inquest proceedings before the State Prosecutor’s Office at the Department of Justice in Manila on August 8.

At least 23 people, including the nine who voluntarily surrendered or appeared before the Major Crimes Investigation Unit (MCIU) of the CIDG, who reportedly transacted with T-ala and Palma, have expressed their willingness to cooperate with the investigation being conducted on the shipment, trading, and selling of smuggled gun parts.

A total of 15 gun parts composed of seven upper receivers, a butt, a handgrip, two magazine assemblies, and four bolt assemblies were surrendered and received by the CIDG.

Inoferio said he surrendered the barrel he bought from Ta-ala upon learning from CIDG that the gun part was smuggled.